With faith as our guide, and “determined determination” (St. Teresa)...
“our eyes fixed on Heaven, the one goal of all our striving” (St. Therese)...
let us not travel alone, but strive to bring as many souls as we can with us!

“I brought you into the land of Carmel to eat its fruit and good things.” - Jeremiah 2:7

The Carmelite Family is called to pursue the contemplative life by standing in the presence of the living God as the Prophet Elijah did, and living in deep union with Christ Jesus in imitation of Mary.

By the spring on Mount Carmel 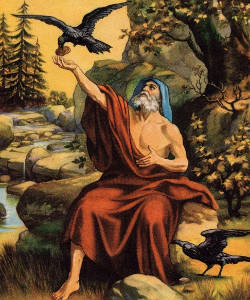 Located in Haifa, Israel this Mountain of God rises out of the edge of the blue Mediterranean sea and was the home of the Old Testament prophet Elijah. In a vision God had ordered Elijah to depart from the ordinary dwelling of men and to hide himself in solitude in the manner described according to him in the book of Kings:

And the word of the Lord came to him (Elijah) saying: 'Get you hence, and go towards the east and hide thyself by the torrent Carith that is over against the Jordan, and there you shall drink of the torrent: and I have commanded the ravens to feed you there."

Mount Carmel was the place of seclusion for early Christian Hermits who, seeking after the face of the Living God dwelt on this Holy Mount in the spirit of Elijah living a life of contemplative prayer and asceticism in its caves. These desert Monks and Hermits viewed Elijah as the father of their monasticism. The fiery prophet Elijah, in the ninth century B.C challenged the false prophets of Baal. By prayer and sacrifice he won the people of Israel back to the worship of the one true God.. At the end of the twelfth century A.D. these Hermits acquired a Rule of Life from the Albert, Patriarch of Jerusalem. They gathered daily for Holy Mass in an oratory dedicated to the Virgin Mary and pondered the Word of God in their cells, living in allegiance to Jesus Christ. They thus came to be known as the "Brothers of the Blessed Virgin Mary."

“Albert, by the grace of God  called to be patriarch of the church of Jerusalem, to the beloved sons in Christ, B. and the other hermits who are living under obedience to him by the spring on Mount Carmel: health in the Lord and the blessing of the Holy Spirit.“ - Rule of Saint Albert, chapter 1

Mt. Carmel is a place of prayer and communion with God. In Hebrew CARMEL translates into the word GARDEN. The symbolism of the garden expresses not only the fertile richness of the natural terrain, but also refers to the grace and holiness bestowed upon the many souls who dedicated themselves to God on its mystical summit.

The desert garden is not only a place of silence, but it also is a place of struggle.  It is in this garden of Carmel where we prepare our hearts and minds to listen to the “still small voice”... and the “precepts of the Lord” so as to persistently seek His Face in prayer.

As the deer longs for streams of water, so my soul longs for you, O God.  My being thirsts for God, the living God. When can I go and see the face of God? - Psalm 43

The order of Carmel ranks among the oldest religious orders in the Church. A Carmelite is not only a nun but she is also a hermit. Her time is entirely taken up by prayer, study and good works and the life of contemplation. From its earliest days, Carmel has produced men and women eminent for their sanctity. It has always remained dedicated to the Blessed Virgin and glories in wearing her Scapular and calling itself the Order of Our Lady of Mount Carmel.

There is a beautiful tradition recorded in the office of Our Lady of Mount Carmel July 16 according to which some of the inhabitants of the holy mountain having come down to Jerusalem at the time of the descent of the Holy Ghost upon the apostles made the acquaintance of the mother of God were converted to Christianity and returning to their solitude erected the first chapel in her honour. The order of Carmel has ever since been the order of Mary. But like all human institutions, it had its period of decadence. In the terrible schism that afflicted the church in the fifteenth century Carmel with the other religious orders went through its period of relaxation so that its rule was finally mitigated. From this period until St. Teresa (of Jesus') time there was always a marked tendency in the order to bring it back to its primitive fervour.

It was reserved to Avila's great Saint to bring about a complete reformation of Carmel's beautiful order. If ever there was a noble soul in God's church it was certainly that of the incomparable St. Teresa. She a poor weak woman did what chapters had tried in vain to accomplish. Assisted by St. John of the Cross she accomplished a complete reform both in the male and female branches of the order of Carmel. Sadly today in our post Vatican II era, we are witnessing again a return of decadence and relaxation of Rules and customs in many of the major Religious Orders, Carmel being no exception. Many in the “spirit of Vatican II” having “opened the windows to let in the fresh air”, (sic), literally removed their enclosure grills (symbol of their separation from the world), and opened their cloisters to the spirit of the world and modernism.

Yet, Our Lady of Mt Carmel has promised that her Order will last until the end of time. We see today a revival of Carmel in many countries, especially America both North and South. New Traditional Carmelite foundations are coming into existence with great fervour and zeal to follow faithfully the semi-eremitical Rule as the early Hermits on Mt. Carmel or the Primitive observance of the 16th Cent Discalced Teresian Carmel Nuns and Friars in Spain.